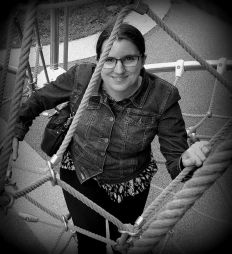 Megan Swaine is a fae that sprouted out of a mushroom in the forests of Ganaraska and decided to start writing stories just because they were easier to understand than people. Perhaps that’s why she spent nearly a decade writing story and dialog for mobile games such as Smurfs’ Village and Ghostbusters, for the Capcom subsidiary Beeline Interactive. She has a Bachelor’s Degree in Creative Writing from York University, as well as a Diploma in Comic Screenwriting from Humber College, where she was mentored by comedy writer David Flaherty (SCTV, Maniac Mansion). She recently won the Narrative Design Award in the Screenwriting and Narrative Design Program at George Brown College.

She is fond of embracing both the absurd and the emotionally honest, preferably at the same time. In her time as a game writer, she’s worked with a number of different licensed IP, from Smurfs to Resident Evil. She enjoys the challenge of speaking volumes with just a few lines of dialog.

This renaissance faerie has also tried her hand at a variety of categories over the years: poetry (A View On the Garden anthology), non-fiction (Career Building Through Interactive Online Games, Career Building Through Alternate Reality Gaming), trivia (iGameTime Android app, Cash Cab iOS app), blogging for a magicians booking agency (Philip & Henry Productions), text message fiction (Tales iOS app) and adult entertainment (details available upon request). She is also currently the Treasurer for the long-running, successful Rowers Reading Series in Toronto. She is now pursuing a career in film/TV writing, as well as continuing to write for video games.